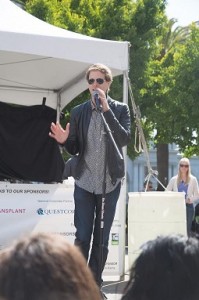 Many remember Scott MacIntyre as a finalist on the eighth season of “American Idol.”

What many may not recall — or did not know — is that MacIntyre, who was the show’s first blind contestant, underwent a kidney transplant almost seven years ago.

“Kidney disease and organ donation are causes “near and dear to my heart,” he said during a telephone interview earlier this week.

He’ll be in Chicago Sunday, June 22 — his 29th birthday, by the way — to sing at the opening ceremonies of the National Kidney Foundation of Illinois’ annual Walk for Kidneys. (He’s working with Northbrook-based Astellas Pharm US Inc., which produces medicines for transplant patients. After the walk he’ll be at the company’s booth to tell his story.)

He was 19, and everything was going his way. Although he had no symptoms, suddenly he was very ill and was diagnosed with stage 4 kidney disease. He began dialysis and needed a transplant. As he waited for a donor, he became so weak he lacked the energy to play the piano or sing, which to him are like “eating or drinking.”

“I felt like my dreams were dying,” he said.

Up stepped Patricia, the wife of his former music professor. “I barely knew her,” he said. Something in his plight touched her. When she agreed to be his donor,  ”she gave me the gift of life, the gift of hope, a gift I hope I can pass on.”

Because of that, his whole life changed. A year after he received the new kidney he was auditioning for “American Idol.” Today both MacIntyre and Patricia, a viola professor, are well and performed together a while back, which MacIntyre described as a “special moment for us both.”

That’s why he wants to be part of events like Sunday’s walk. “If I can do anything to  encourage even one person (to be a donor), it will be worth it.”

When he performs Sunday, MacIntyre will sing his song “I Am Hope, which he said has “become a theme song for a lot of the transplant community.”

And hope is just what he wants people to hang onto, to take away from his story.

“I never let go of my dreams or the hope that one day I would be able to make music again.”

The National Kidney Foundation of Illinois’ Walk for Kidneys begins with a health fair at 9 and the walk kicks off at 10:30 a.m. Sunday from the Stadium Green Lawn of Soldier Field.