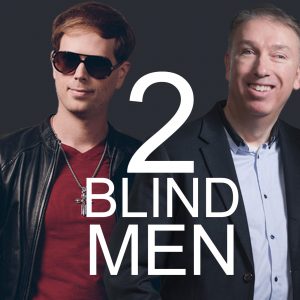 On June 1st, Scott MacIntyre launched an original podcast with friend and music industry colleague Mark Dowdy called “2 Blind Men.”  The podcast initially launched with 3 episodes, and a new episode will be released the first Monday of each month to follow.

Not only do Scott and Mark share a love of music, but they were both born blind.

“When I met Mark, we connected immediately,” remarks Scott.  “I noticed pretty quickly that Mark had a great voice for radio.  I had always wanted to do a radio-type project, and it became apparent that Mark was the right guy to collaborate with on a show like this.”

Each month, “2 Blind Men” will feature an inspirational guest.  The lineup of guests includes people from all industries and walks of life who are having an impact on the world for good.